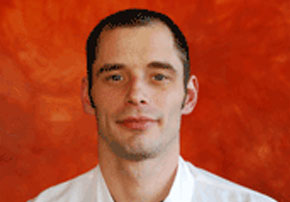 “I wanted to be a chef at an independent restaurant,” says Executive chef Tom Legg at La Bodega’s Leawood location. “I wanted more creativity and the opportunity to be who I am as a chef.”

Legg found that opportunity in March 2011 at La Bodega after stints at corporate restaurants with well-known names over his career. However, Legg’s first foray in cooking began at the age of fifteen in a modest kitchen in Vincennes, Indiana. There, Legg helped his mother prepare family meals at home. That interest in cooking led to study in a culinary program for two years.

Next, he began cooking at Fourwinds Restaurant and Marina on Monroe Lake in Bloomington, Indiana. Legg found that what he learned in culinary school was the tip of the iceberg as far as working in a professional kitchen.

In order to grow as a cook and encounter other operations, Legg headed from southern Indiana to Phoenix. Over a ten-year period, he worked at a high-volume steakhouse, Cheesecake Factory, and finally at North, a modern Italian restaurant chain with locations in five states.

In these kitchens, Legg learned how to be more efficient with less time to prepare and cook while working in tight spaces. “I honed the fundamentals of my culinary skills,” he says. “It was the first taste of me being in a competitive restaurant scene.”

Legg was promoted from lead line cook to sous chef at North Restaurant in Phoenix. When owners Fox Restaurant Concepts decided to open a North location in Leawood, Kansas, they tapped Legg to relocate and work in the kitchen as sous chef.

When La Bodega opened its second location in Leawood just a few doors down from North, Legg seized the opportunity to advance his career and expand his professional responsibilities. Initially, he worked as a sous chef and was promoted to executive chef one year later.

The chefs at each La Bodega location in Leawood and Southwest Boulevard in Kansas City’s Westside have autonomy to create different specials.

“We will talk to each other about ideas for specials, but we each experiment so there’s some variety at each location,” says Legg.

Legg focuses on creating daily specials with fish, pasta, and meat to complement the array of tapas that is the mainstay of the restaurant’s menu.

Legg adheres to the manta of “fresh is best” when it comes to ingredients. He also cooks with a focus on offering good value and a good product. “I cook with pride as if I were serving my mother,” says Legg.

He savors the challenges and daily changes he faces in his role. “I strive to do things better daily and operate the business efficiently,” he says.

Legg’s rewards come by way of compliments when he hears guests talk with enthusiasm about the food and restaurant. He says, “It makes me feel like I accomplished something for that day. The restaurant is part of my home. When people come to eat my food, that’s the impression that I want to put out there.”

As executive chef, Legg’s approach to cooking and running a kitchen not only makes a mother proud, but also pleases guests hungry for tapas, paella, and Spanish-influenced fare at La Bodega.