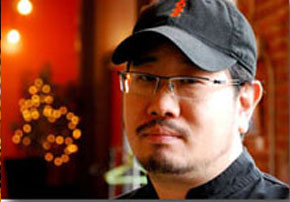 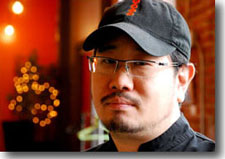 A high energy mix of Madonna’s classic “Get into the Groove” plays in the morning at Nara as Sushi Chef Koji Sakata prepares sushi rice for the day in the kitchen. Polite, relaxed, and brimming with hospitality, Chef Sakata exudes a calm demeanor that contrasts with the upbeat music in this Asian-inspired downtown restaurant. Unlike ever-changing trends in pop music, Sakata has been preparing sushi, a timeless form of culinary art, over a career that began in 1986 coincidentally when Madonna released her third full-length album True Blue.

Sakata first began his training as a sushi helper at Kuruma Sushi in Japan. A year later he progressed to line cook at Hikari Japanese Restaurant. From 1988-2004, he worked and trained over a 16-year period at Kabuki Japanese Restaurant in Kansas City’s Crown Center. Sakata progressed to sushi chef at Matsu for two years prior to landing at Nara, where he has been the lead chef since 2006.

“My family has always been in the food business,” says Sakata, who was born in Los Angeles and was raised in Japan. “I grew up in the kitchen. I was fascinated by the food.”

He finds the instant gratification of pleasing people with this sushi quite enjoyable. He says, “As a sushi chef, I get to be creative and figure out what my customers like over time.”

A sense of community develops as regulars return to savor his food, whether it is a sushi roll, nigiri, fresh seafood special, or Kobe beef burger.

Sakata prepares both traditional and more modern versions of sushi rolls. He instructs his staff to learn the foundations of sushi. “You have to have the basics before you get creative,” he says. Despite his ample experience, Sakata doesn’t get complacent about his food knowledge as he considers how a new season’s rice crop or fish might affect taste. “I’m still learning. I am always looking for something new.”

At Nara, Sakata has helped to expand customer understanding and appreciation for what sushi can be. Prior to 2006, the best known sushi restaurants in Kansas City were Jun’s and Kabuki. Customer sophistication and attitude toward sushi has grown more refined. “Now more people are familiar with sushi,” he says.

Popular items include spicy tuna, California roll, the Sexy Mama, and Nara rolls. Sakata and his team have fun with daily specials, depending on the availability of fresh fish.
For those new to sushi, Sakata advises guests to “ask the chef what is best, what is fresh. Chefs take pride in what they serve.”

Sakat leads five cooks in the kitchen, teaching them the fundamentals as he learned over two decades earlier. They prepare vegetables, learn how to clean and filet fish, and mix the rice with proper seasoning. At some traditional sushi houses, a cook might spend three years alone learning all aspects of rice preparation before graduating to other steps.

When it comes to teaching and leading his staff and serving customers, Sakata lets his innate hospitality, well-honed expertise, and elegantly prepared food do the talking. He says, “I work the best way I know how to. I want to make people happy and see them smile.”