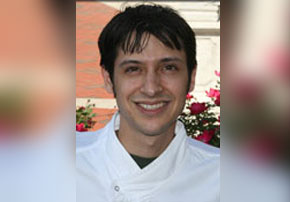 Robert Padilla recently became Executive Chef for Trezo Mare after working there for about 18 months. He believes that attending the high school culinary program at Northland Career Center was one of the best decisions he has ever made. Padilla’s career has taken him from the kitchen at Lidia’s Kansas City to helping open Lidia’s Pittsburgh, PA. He worked in a fine dining restaurant on a legendary downtown Pittsburgh hilltop, and helped to open a P.F. Chang’s and worked in several other venues while living there. Padilla further honed his skills at a number of local restaurants, including Grand Street Café, Piropos, Café Maison, and Bluestem – where their use of local food purveyors ‘really inspired me,’ he says.

“I want each ingredient to stand on its own while using simpler cooking techniques; serve food that is made perfectly; and give customers the best preparation they’ve ever had. I want people to feel really comfortable with our food, but also get them to try new things – food they’ll come back for.”