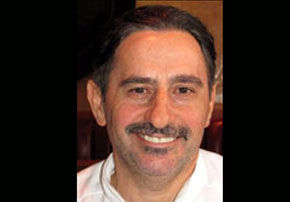 Pietro ‘Mario’ Giaconia says that he feels like a family member after working a total of two decades at Cascone’s Italian Restaurant, including the last 13 years. “I like to stay at places for a long time,” he says. At age 18, Giaconia left his tiny town of Castelbuono, near Palermo, Italy, and entered the restaurant industry. He worked at Lago Maggiore, in Hamburg, Germany and spent 14 years at Hotel Costa Verde, in Cefalu, Sicily, Italy, before coming to the United States. He then completed two semesters in the culinary program at Penn Valley Community College and also worked at the Westin Crown Center hotel.

Giaconia says that he makes everything from scratch, using fresh ingredients, including sugo (a long-cooking sauce) like his mother used to make. He realizes the importance of keeping the old recipes that Cascone’s customers love, but also likes to create new dishes, which he often serves as lunch specials. “I don’t like artificial food or the microwave,” Giaconia says.