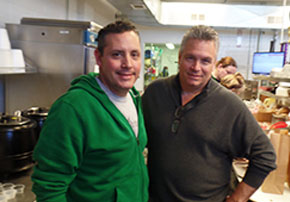 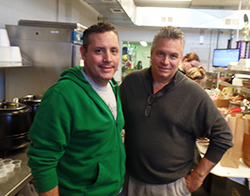 The KC Originals are pleased to welcome a new addition to our family, Hawg Jaw Fritz Restaurant, an award winning BBQ establishment in Riverside, MO [located just a stone’s throw from the Red X]. It is the newest venture of Brothers Nick & Sam Silvio who also own and operate Em Chamas. When they purchased Hawg Jaw Fritz last December one of their first priorities was to bring it into the KC Originals Loyalty Rewards program as its first Kansas City style barbecue venue.

Nick & Sam, are hardly new to the restaurant world having grown up in a family that opened the first Pizzeria in Kansas City run by their Dad Antonio. Having learned the business & great food from their parents, the brothers have been associated with a number of food & beverage establishments around the metro over the years as well as operating their own ventures. Sam helped open up Piropos at its original location in Parkville and later both he and Nick helped manage the Briarcliff location as well. In early February of 2007 the brothers launched Em Chamas Brazilian Grill, introducing Kansas City to the “rodizio” style of service [smoked & grilled meats presented & sliced to order off a skewer at the table].

When they heard that Hawg Jaw Fritz was for sale they felt it was a great opportunity to expand their family business to include local style barbecue. This Riverside hideaway opened in 2011 and immediately gained critical acclaim being named by The Pitch readers as the Best New BBQ joint in the KC metro [2012] and the smoking team behind the food had awards from the American Royal in 2009 & 2013 to bolster their street cred. Pit Master Catherine “Cat” Thompson continues to oversee the smoking process and has her eye on more trophies to line the counter.

Nick Silvio, who is also a KC firefighter, handles the top chef duties and brings his lifelong love of food, cooking and service to the task. Since December his bean recipe has replaced what was being served and a family recipe for cheesy corn is new as well. And the most popular new addition is his creation as well, the house made “Bossman Sauce,” tangy and just the right balance of sweet & spicy. He also added a Smoked Prime Rib dinner special that is available on Fridays. Guest are loving Nick’s tweaks and that suits him fine. “Seeing happy customers and providing great service” is his primary motivation.

Brother Sam echoes that sentiment. “I am always touched by the gratitude expressed by guests who visit our restaurants and knowing they are heading out the door satisfied by a great dining experience is what boosts my ego.” And, he tells us, “We have big dreams for the future.” There are plans for kitchen expansion and more indoor dining seating. There’s a big lot out back that offers great potential for a public entertainment venue/ event space. And there might be an international BBQ food truck in the works as well. Who knows what the KC Originals “Kings of BBQ” will create next. Meanwhile, head on out to Hawg Jaw Fritz for outstanding KC style barbecue or give them a call and have them cater your next event!