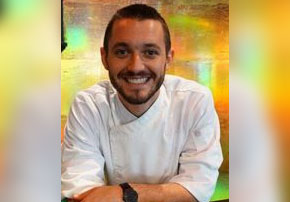 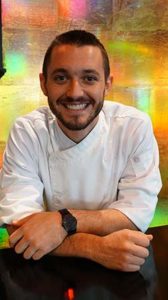 Cafe Trio is just about to experience a new Fall-Winter menu revamp and this time it will be directed by the skilled hands and culinary creativity of their new Executive Chef, Nick Estell. A graduate of the California School of Culinary Arts, Nick, raised in a large food-centered Italian family in Lee’s Summit and who took cooking classes in Junior High, had his first high school jobs in local Country Clubs & Steakhouses. So, his career choice was set early!

Over the years his skills have been honed not only by the classical cordon bleu style training of culinary school but the hands on apprenticeships he has served during school and later when he returned to Kansas City. You may notice a slight Asian influence in Chef Nick’s dishes which comes from his time at Crustacean, a highly praised, Zagat rated Vietnamese restaurant in Beverly Hills. But Nick is quick to tell you that the most profound influences come from the mentorships and friendships established in his KC experience beginning in 2007 when he was hired by Celina Tio at The American Restaurant and worked along such young turks as Phil Klein, Alex Pope, and Brad Kilgore. A move to Chef Celina’s Julian on Brookside when it opened in 2010 was the next step in his journey of growth and maturity.

Nick cut his management chops so to speak when he was hired and then took over as the Executive Chef at “The Final Cut” Steakhouse at Hollywood Casino, followed by a stint at Harrah’s Casino as well. “Whether it was something good or something bad; I’ve always learned something that I could use in my life as a chef,” say Nick. And at this point in his culinary journey he adds that he appreciates having arrived at Cafe Trio where he can work in an “all scratch” kitchen and a stable environment. Like most chefs, Nick is a bit of a work-aholic, but he carves out time for his growing family with his partner Corinne, 4 year old Nora, and the new little girl that is still on the way. It’s good to have a balance!

When asked to describe his culinary philosophy Nick says that “it’s a fusion: classic French technique, contemporary American style, blended with flavors from the seasons, the sea [as fresh as you can get it] and diverse, & varied cultural influences.” Since he arrived at Trio a couple months ago, he’s been trying out some options as specials, such as the Vietnamese inspired “Banh Mi” sandwich we had for lunch that he and Lunch Sous Chef Michael have been working on [It’s extraordinary]. Another item he hopes to add is a Moroccan Flamed Flat Bread Pizza in the small plate offerings; as well as Chicken Bolognese with Fennel infused [or as he called it “laminated”] Pappardelle noodles as an entree. Sounds amazing, right?

One of his favorite foods “Sea Scallops” will always be on the menu, he says; unless market prices make it impossible; and he hopes to expand the size of his garden at home so that he can increase the amount of fresh herbs and vegetables incorporated in Trio menu items. “Menu creation and developing recipes is an art form” he thinks and he was greatly inspired by the recent display of famed Spanish Chef Ferran Adria’s notes & sketches. Learned techniques support experimentation and a reliance on intuition to blend flavors and textures. Then comes the tweaking to get it just right so that you can turn out a consistent winner on the plate every time.

Sounds to us like Cafe Trio has a Winner in the kitchen – be sure to check out his new Menu offerings beginning in early November. Delicioso!