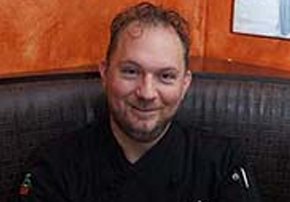 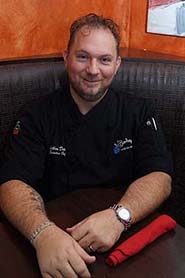 Several years ago one of La Bodega’s owners, James Taylor, paid an extended visit to Spain and returned to KC with a 150 page notebook gleaned from the traditional recipes he enjoyed in the homes of local families. La Bodega [in both locations] offers many of these recipes as part of their fare and also introduced the Spanish tapas [shared small plate] concept. The Crossroads and Leawood locations share the same core menu but each has its own executive chef tailoring their menu to reflect the tastes and comfort zones of their guests.

In 2013, Chef Nathan Deters took charge of the notebook containing La Bodega’s treasured recipe stash and became the translator-in-chief responsible for bringing them to culinary life with his own tweaks and appreciation for the sensibilities of a different cultural audience. And he is really enjoying that creative challenge – “loving the opportunity to play with ingredients as well as applying artistic vision to the presentation of each dish.” Naturally a very busy restaurant such as La Bodega also offers less fun challenges, especially recruiting talented and motivated kitchen staff as well as keeping food costs in line so that customers receive great value and reasonable pricing, Chef Nathan says that “having a million things going on at once, the pressure of being busy” also energizes him.

How does a guy born and raised in a small farming community in Eastern Iowa end up as the head honcho of a high volume, fast-paced suburban Spanish-themed dining experience in Leawood, KS. Well, it begins with a decision to explore culinary school at Kirkwood College in Cedar Rapids, IA to learn the basics and nurture his food passions.

Achieving both goals he also met and married the love of his life, Sarah, also an executive chef here in Kansas City. Not quite in competition with Nathan, Sarah is Executive Chef for the iconic Three Dog Bakery and tailors her taste treats to our four footed friends. After Kirkwood, they both worked in various kitchens around the Midwest but eventually landed in KC. Both avid dog lovers with a handful of furry babies at home, Sarah’s passion steered her to Three Dog while Nate followed a more traditional culinary path gaining experience and skills at several KC locals including Hereford House, Pierpont’s, Trezo Vino, North, and Pig & Finch, until being recruited for the top spot at La Bodega.

Other things you might like to know about Nathan Deters; well, he is a die-hard BBQ aficionado – Arthur Bryant’s is his all-time favorite and go-to recommendation. And he even has a small home side business, Boxer Bite BBQ [ find it on Facebook] where he is perfecting a line of sauces and dry-rubs. The labels show the family’s 3 super cute pups. He is also an ice hockey fan and plays on local amateur team. Not sure where he finds time; but as he said – he loves to be busy.

Spanish flavor palates are not particularly hot, but they can be spicy and Chef Nathan wanted us to be sure to tell folks that the menu at La Bodega might sound intimidating at first glance; but they should know that “many of the dishes are American favorites with a Spanish twist or adaptations of centuries old Spanish recipes adapted to what American diners enjoy.” In fact, Nathan thinks that the Tapas menus are a great way to explore the Spanish style as it allows one to try a wide variety of small bites and then hone in on the flavors and textures that one really enjoys. Of course, it is the communal experience of tapas service that generates the most positive of La Bodega’s reviews. But don’t forget to experience their amazing Wednesday night Paella Challenges and look forward to the Monday night fixed price menu option that includes 1/2 bottles of wine. A man of great passion, Chef Nathan Deter’s energy and dedication to these great dining experience is sure to bring you back for more and more!