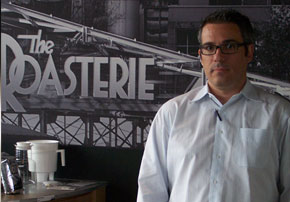 Operations Director of The Roasterie Cafes 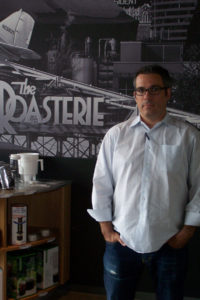 It’s been awhile since we featured The Roasterie Cafes and this time, as Roasterie Coffee celebrates its 25th Anniversary as a company, we visited with Mike Valent, their Director of Cafe Operations. Also known as Bean Machine, Mike’s career, starting with a Finance degree from the University of Kentucky has been in the hospitality and food service industries. He did once try his hand in banking. That he describes as “the longest year of my life.” In 2014 he joined Roasterie and says it was an easy choice, “since they are a company with a great product, strongly rooted and engaged with the local community, and brand completely associate with Kansas City on so many levels.”

During his tenure he has presided over the rapid growth spurt of the cafes that added 6 new metro locations in 2017 alone. He loves getting out to visit each and every one to ensure that they are operating smoothly and spreading his management philosophy that “the Roasterie [and its Cafes] is a great service company that happens to sell exceptional coffee.” When he is not wearing his “Bean Machine” hat Mike is a husband and father, enjoys regular and disc golf, hiking, as well as cooking. He tells us he makes a killer Spaghettis & Meatballs [the secret is in the meatballs – a 50/50 blend of ground veal and pork] and that someday he might enter a local BBQ competition. Now that’s ambition!

Of course the Cafes are participating fully in the 25th Anniversary celebration. Each cafe brews and serves daily the special Anniversary blend which can only be purchased at the cafes [not in stores] or through the company website. Events like an ice cream social t the new Main Street location, first Fridays at Corrigan Station, special pop-ups and a signature Anniversary event in September at The Factory are all on tap. As owner and founder Danny O’Neill says: “we don’t just want to celebrate our anniversary, but we want to include the city that’s made the last 25 years possible.

Over each of the Summer months the cafes are featuring specialty drinks created from the Roasterie’s signature Cold Brew or Nitro coffees mixed with other yummy ingredients. The June specialty, called the “North Shore” is pictured along with the not so secret recipe in the accompanying article below. Mike tells us that these cold brewed beverages are the result of a slow [19 hour ] steeping process that results in a concentrate or that can be canned or put into kegs. These brews are higher in caffeine but give less of a spike than hot brewed. Nitro adds a nitrogen infusion that gives more mouth feel than flavor. We sampled the “North Shore” and it’s delicious! In July, the “Street Car” made with Nitro sounds just as good.

With his “last word” Mike wanted to let you know that with so many locations the Roasterie Cafes are very convenient and provide the fastest service possible. The Factory and Main Street locations also have drive through service. You can visit the website for a complete list of all the Roasterie Cafe Locations, hours of service, and notices of the planned 25th Anniversary events at www.theroasterie.com/cafes or on Facebook at www.facebook.com/TheRoasterie