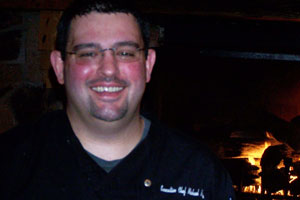 Now Executive Chef at the Hereford House in Independence, Michael Morgan has spent almost his entire professional career within local, home-grown Anderson Group restaurant chain and in a competitive industry that says a lot about the kind of loyalty that it inspires as much as it does about the stability and consistency it brings to the guest experience at the table.  Mike says that he knew almost from the first day he started back in 2002 that Hereford House was a great fit for him.  As Hereford House is celebrating more that 60 years in business, the key in Mike’s mind is the philosophy of “making dining a big feast. That has stood the test of time and ensures guest loyalty to the brand.”

Chef Mike is an easy guy to get to know – laid back with sense of humor, a happy guy who loves coming to work, appreciates his co-workers and the company he works for, and just loves “steaks.”  “My favorite thing to cook,” he says, “is one of Hereford House’s Sterling Silver mid-west grain fed and well-marbled steaks which we have hand cut and then wet aged.  Getting that prime beef [lightly seasoned to let the meat shine] onto the charcoal grill and cooking it perfectly is the highlight of my day.”  The Hereford House beef and their preparation methods has given them the reputation for being the gold standard for steaks in the KC metro, a reputation that is hard won with lots of competition.  He loves the fact that many of the people he works beside are “real Kansas City people, many as more than 20 year veterans with Hereford House preparing and serving real Kansas City food.”

Mostly self-taught, the story of how this KC boy,  a bit of a misfit who was mostly on his own by the time he was 17, became an EC, the Master of his culinary house; is inspiring.  He was enrolled in a vocational school in HS and at age 14 decided to explore the culinary program. Some courses were taught in Platte County where he was mentored by Chef Paul Santalaria and began to discover his self confidence as he learned the fundamentals of his craft.  He did an apprenticeship at Harrah’s Casino and enrolled in the Culinary Arts program and Johnson County Community College. Unfortunately, the demands of paying bills and keeping a roof over his head required him to leave formal training and “find a real job.”  Hereford House gave him that job and a second family. He has no regrets and on the job training has made him a better cook, co-worker, manager and supervisor – learning all the jobs in the kitchen within the Hereford House family dynamic.

Of course, Chef Michael has his own family; a wife who does a lot of cooking herself; but they love to collaborate on the big family holidays and events.  They are raising two adopted teenage daughters and another little girl of their own, age 3. His spare time is devoted to time with all his girls, traveling and visiting extended family, enjoying the outdoors while sledding or snow-boarding, and occasionally a game of billiards. “Just being Dad is the best.”  And while he admits to “Oreos” as a guilty pleasure; he says his food explorations of late have been directed toward South American cuisine and foods of the American South [cajun and creole]. “The common element there is the use of spices to layer flavor upon flavor in the cooking process to make something spectacular out of simple beginnings.”

We all know that Hereford House is all about steaks, but Chef Michael wanted to call our attention to an initiative there that is sort of a “not just steaks” campaign. Lent is a great time to do that and many new seafood dishes are appearing on the menu.  They are doing a fresh Mahi, Mahi on the grill. There will be Lobster tails, some amazing large Divers Scallops [U-10’s]. He’s experimenting with a shrimp and scallop dish over rice with a pesto cream sauce; and a favorite item is the Grilled [Scottish] Salmon with Garlic Butter [featured in the newsletter below].  Mike says they also recently added a Grilled Vegetable Salad which can be served with added protein  and that comes with a heart healthy Sun-dried Tomato Vinaigrette.

Chef Mike says that he wants you to know how grateful he is the each and every guest that walks into the Hereford House and how much he “appreciates the regulars who have stuck by us for these 60+ years. We are committed to quality and to striving to make every experience a good time, a celebration, whether it’s a normal lunch/dinner or a special occasion.  So come celebrate your best times with us!”  If you want to take up that invitation, you can learn more about al that HH offers at www. herefordhouse.com