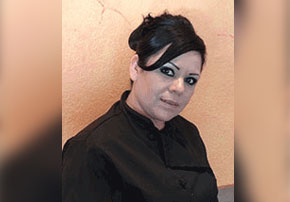 Panzon’s has been serving up great, authentic Mexican fare in Lenexa for 19 years, and Chef Maria Guzman has been there since day one. The name Panzon’s, which translates to “big belly” or “pot belly”, was suggested by the kitchen staff to the owner, Chuck Mahowald, as a gesture to pay homage to him. Chuck or “Chucky” as Chef Guzman calls him. Chuck was the GM of Ponaks prior to starting Panzon’s, this is where Chef Guzman first got her culinary start. She started cooking there at the age of 18, and has worked side by side with Chuck for 25 years.

Chef Guzman’s first position at Panzon’s was working the line in the kitchen, where she was the only woman. She told me, “I have spent all of my life in a kitchen”. Chuck started from scratch with all of his recipes at his new restaurant. But, with Chef Guzman in the kitchen, they began to collaborate together on all menu changes. One great example of this culinary teamwork is the Crisp Avocado Wedges, which are a recent addition to the menu.

Some of Chef Guzman’s favorites include, Chile Verde and Black Bean Soup. “I like to make things like these because they are healthy, low calorie, and very fresh. The best offering on her menu that you absolutely must try are the Asada Tacos, which have fried carnitas and grilled pineapple.

“Lenexa is different. We have very special people here. Some people are new, but we mostly have the same customers coming back all of the time… and everyone loves my food.” Chef Guzman also told me the best part about working at Panzon’s is, “Chucky, he is a very special boss. I respect him and he respects me.”

Maria and Chucky are both very passionate, and invite diners to enjoy their vast selection of fine Tequilas, the jaw dropping authentic Mexican art that adorns every wall, or just to join them during Cinco de Mayo for outside grilling under a large tent, where it is often standing room only.