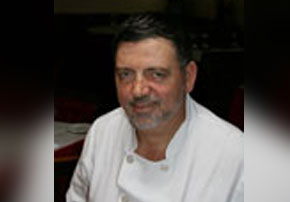 Mano Rafael grew up in Marseille, France, where his mother, Michelle, brother, Jean-Roger, and Uncle Patrice Boelly, were all chefs. At age 20, Mano opened L’Auberge du Midi in New York’s Greenwich Village, with Jean-Roger and his wife, Drissia. While there he met his future wife, Barbara. After the brothers parted ways, Mano worked at The Ritz Carlton, Petrossian, The Millennium, and Casanis in New York City. While at Casanis he received many accolades, including one from Ruth Reichl of New York Magazine, who called his chicken “state of the art.” Mano and Barbara married, came to Barbara’s hometown of Kansas City, and then opened their dream restaurant, Le Fou Frog, in September 1996. The restaurant’s name means “The Crazy Frenchman,” and Mano revels in providing authentic French fare plus his own creations.

Mano is absolutely “Fou” about food. He brings to Le Fou Frog his passion for fish and sauces, and enjoys Kansas City’s wonderful meat offerings. Mano likes to take French basics and give them his own twist, and transforming mundane ingredients into something spectacular.