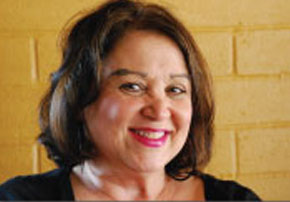 Sitting at a table in the front of Carlo’s Copa Room, Kathy Fiorello tries to relax on a weekday afternoon. Her black outfit and dark hair contrast against the walls painted in gold and tropical plants with jade-colored leaves. She’s more comfortable in the kitchen preparing food for guests than being the center of attention.

Fiorello has been the chef at the restaurant since its opening eight years ago on Broadway in midtown Kansas City. Now located near 87th and Lackman in Lenexa, Kansas, the restaurant occupies a cozy spot in the shopping center near Hen House Supermarket. Here, Fiorello and her kitchen team prepare classic Sicilian fare from lasagna to meatballs.

She’s the first to admit that she’s not a professionally trained cook. Fiorello learned Sicilian dishes from her mother, mother-in-law, and older sisters. She’s the youngest of four. Her parents emigrated from Sicily and met in the U.S.

Sicilian heritage is apparent in the family-style food served at Carlo’s Copa Room. “I use family recipes,” says Fiorello. “I make pasta and meatballs, ravioli, spiedini, tiramisu, and cannoli.”

Fiorello is also inspired by dishes she sees elsewhere, watching food programs on television and drawing from past experience. Fiorello has worked in restaurants as a bartender, server, and cook. She says, “I’ve learned a lot by watching other people and being in the business. There’s so much you can learn, but I try to do food that my family likes.”

While upholding classic flavors found in Sicilian cuisine, Fiorello also follows her creative instincts. “I don’t follow recipes,” she says. “I do it my way. I want to cook food that makes people say, ‘That’s wonderful. Not just so-so or good. Wonderful.’”

Her soups are a popular dish especially during lunch. Cream of chicken spiedini, cream of potato and ham, Italian sausage, and Italian wedding soup are a few examples of the soups she prepares fresh each day. Regulars also come in for lunch sandwiches and daily specials.

Sausage and all dishes are made from scratch at the restaurant. When it comes to seasoning with herbs like basil, Fiorello tends to keep flavors true and not get too complicated when preparing a sauce of popular Sicilian dish.

Desserts such as tiramisu, cheesecake, spumoni cake, and, once in a while, cannoli cake, are crowd-pleasing dishes. She uses ricotta in the batter for her sfinge, a type of traditional fried dough confection typically dusted with powdered sugar.

Despite the long hours and hard work in the kitchen, Fiorello enjoys her time at the cutting board or preparing a pot of marinara. “Cooking relaxes me,” she says. “I like to do prep in the kitchen where I can focus in my own world.”

The joy of cooking for her is seeing that her dishes make people happy. And with no shortage of customers, the joy keeps coming as Kathy Fiorello cooks to please.