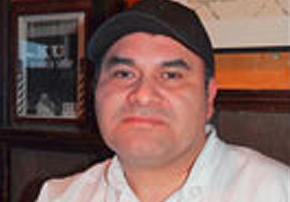 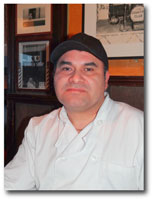 This little gem in the River Market is very well know in the KC area and by it’s faithful neighboring patrons for it’s VAST selection of Bourbon, Scotch, and Tequila. They are also famous for their incredible beer selection and as a venue for live music. What returning customers and future diners may not know is that Harry’s Chef Juan
Becerra can really whip up some great comfort food favorites as well as some palate popping daily specials.

Harry’s Country Club as been serving the River Market area for 10 years now, but for the past 3 years Chef Juan Becerra has been infusing into the menu some of his own culinary expertise. In addition to Harry’s wonderful comfort food staples such as Chicken Fried Steak and the Knife and Fork Chili Dog Juan Becerra has added some dishes like Chorizo Encrusted Chicken and a personal favorite of mine, Chilaquiles Verde. Chef Juan’s menu also serves breakfast all day long for that hang over cure you might be looking for.

Before Chef Juan and Harry’s Country Club found each other he was previously a Chef at Cafe Barcelona for 9 years honing his skills. Although not classically trained in culinary school, Juan Becerra got to where is is now the old fashion way… he worked for it. Chef Juan said he loves to make food that people enjoy and more than that he loves any culinary challenge. “I’ve never eaten a dish that I don’t like” said Juan. Probably because he cooks mainly for himself. Smart man.

With a kitchen staff of 9 dedicated people who work underneath him Chef Juan has free rein of the kitchen as well as preparing daily specials for Harry’s. He told me during our chat that he very recently had one of his favorites as a daily special. Filet Mignon accompanied by a baked potato and veggies… all for $14.00. I will be keeping a eye out for that one to return…. and you should too.