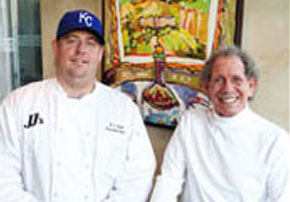 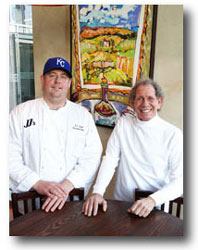 We sat down recently with Jimmy Frantze, owner and founder of JJ’s Restaurant that just re-opened in their fabulous new digs on the main floor of the Polsinelli building on the corner of 48th & Roanoke at the western end of the Country Club Plaza. As Jimmy points out, after the devastating and tragic explosion in February 2013 just after they officially celebrated their 28th anniversary, there has been terrific support for their re-opening and tremendous anticipation as well. He and his loyal staff [about 70% have returned to work in the new space] are providing stability and continuing the “family & friends” culture that has been the bedrock of JJ’s food & service. Jimmy says, that only a little over two months into the process “we are still picking up the pieces and feeling our way into the future – basically taking each day as it comes.” Based on what we can observe, that future is here and here to stay!

Much is changed, but much remains the same to be sure. The new contemporary space is a major departure from an ambiance many might fondly remember but the high ceilings and glass windows facing out on the enormous open air deck [a whole new dimension for JJ’s that will no doubt be a happening place in the balmier seasons] expose bar patrons to great natural light and a pleasant neighborhood view. The massive new bar will be appreciated by old timers as well as by the slightly younger crowd of Plaza dwellers that are discovering JJ’s as a welcoming neighborhood gathering spot. Another great new feature is parking -lots of it underground and free with validation – or you can even use the Valet service. All of this is backed up by top-notch service and hospitality; from the friendly “welcome’s” as you enter to the heartfelt “thank you for coming to JJ’s” as you depart.

The dining room has a warm, embracing feel, with a touch of rustic European styling enhanced by the inclusion of furnishings inherited from Starkers Restaurant, a silent, but poignant homage to restaurateur and chef John McClure. Blending it all together is a major collection of Savage art [paintings by KC artist Michael Savage] that fills nearly every blank wall with colorful, engaging imagery of food, wine, happy people and relaxing landscape vistas. Mike painted these exclusively for JJ’s to replace the 40+ pieces lost.