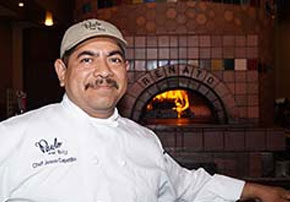 From Paulo and Bill Restaurant 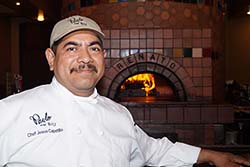 After a scrumptious Grilled Chicken & Avocado sandwich with a House Pasta salad side, we were joined by Paulo and Bill’s Exec Chef, Jesus Capetillo, to discover the brains and talent behind such deliciousness. Soft spoken, with a charming accent, Chef hails from Mexico City. He happily shared his fascinating life journey with us over some wine tastings that co-incidentally were also on the day’s schedule. Lucky us!

Chef Jesus says he owes his career to the generosity and kind-heartedness of folks who recognized and nurtured his talents as a chef at critical moments . The first was a wise patron and restaurant owner of in Mexico City. He found an unemployed young Jesus and offered him not only a job in his establishments but the chance the learn culinary arts. In exchange for hard work and dedication Jesus was afforded the opportunity to attend the Chicago Culinary Arts School that ran a training program in Mexico City. For 3 years he studied diligently to become a chef, choosing to devour courses in all different kinds of international cuisine, along with the fundamentals. He excelled.

The next phase of his culinary career began when he had an opportunity to emigrate to the United States and moved to Kansas City in May of 1999. His first job after he arrived was making sandwiches at a Jason’s Deli, but he knew that something better was waiting for him. He found out about a possibility at Paulo and Bill for a chef’s position and applied. His poor English was a handicap and at first he was hired just to wash dishes. However, on a day when they were short handed in the kitchen one of the owners was pleasantly surprised to learn that Jesus was indeed a trained chef, capable of preparing even their most complicated menu items. After that Jesus moved quickly from dishwasher, to a line cook, and in less than a year the Chef – a relationship that has lasted 15 years.

Chef is full of gratitude for the wonderful chances life has given him and the people who saw his abilities and rewarded them. He is grateful also for his wife and family [he has 3 sons and 2 daughters] and is thrilled that his culinary career has enabled him to provide for them. His youngest son [age 10] loves to cook and thinks he may follow in his Father’s footsteps, but Jesus says he will be happy with whatever choices his children make for careers. Despite the long hours at work, Chef says he just enjoys spending time with the family in his off time and even relaxes by helping his wife prepare meals.

So, as we sipped a little more wine, we asked about his favorite menu items, favorite foods and recommendations for guests. You could see his eyes light up even more as he talked about the joy he gets in preparing the seasonal and weekly Chef’s specials. “I just love exploring new ideas and the creativity of mixing together new ingredients.” Cleary the international exposure of his training informs his choices. He described a salad special featuring a romaine heart split open on a plate with a portion of grilled salmon, mango salsa with feta cheese and a Maytag vinaigrette And his favorite foods – seafood of all types – so it sounds like a best bet at Paulo and Bill is to seek out those chef specials.

Jesus says that he is most satisfied when he know that his creations “are pleasing the guests!” He recommends the “Salmon Kebabs” and the “Chilean Sea Bass with angel hair pasta in a light garlic & olive oil sauce.” Of course, the KC Strip is a staple at Paolo & Bill and Chef says “how can you beat one of the best cuts of meat in the world?” How, indeed. As we wrapped up our conversation, Chef mentioned their upcoming Central Coast Wine Dinner which is slated for Tuesday, July 26th at 7:00 PM. He is very excited about this event and the work he and Chef Apprentice Ronal Hernandez have been doing in preparation. At $70 this 5 course events sounds like a great value. So we recommend making reservations ASAP for this or just to visit and enjoy anything Chef Jesus prepares for you!