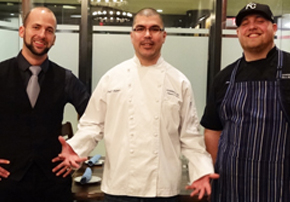 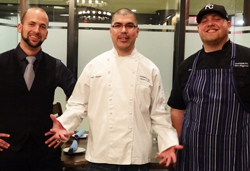 In the Fall of 2014 when Jason Craine and his wife Charisse were just about to give birth to a baby girl, they also purchased the Aixois Brasserie at 10th and Walnut, renamed it Charisse, and embarked on the adventure of bringing an exciting new culinary venture into existence as well. Lots of pressure, but if anyone can handle it, Chef Jason certainly can with vision, creativity and a wealth of hands on experience.

Planning a career as a Film Director Jason supported his education working at A&G Restaurant in Marysville, MO where as kitchen help and eventually Manager he discovered his love for the food business. That passion was ignited after a move to KC and a stint working at North in Overland Park where he met and was inspired by Fox Concepts’ driving force Sam Fox. Jason says, “I was impressed by how down to earth and realistic he was in acknowledging that this industry comes with lots of challenges to overcome, but you can succeed & make your plan happen with self-confidence and trust in your instincts.”

A move to California gave Jason a chance to work with the legendary chef Jim Douglas, himself was a protege of Wolfgang Puck. Under Chef Douglas’ tutelage Jason started climbing the culinary ladder in earnest honing his culinary techniques and skills, discovering the challenges of catering & large event planning as well as exposure to the financial demands of leading a successful culinary business. Back in KC in 2012 he was ready to jump into his career with both feet and landed at Aixois Brasserie soon after it opened. He was Sous Chef, then Chef de Cuisine under Manny Langlade; and then in August 2014 he sealed the deal to take over the restaurant. Since then he’s been going full tilt; putting his own stamp and name on the concept and food.

Charisse is a fusion of cultures and cuisines that Jason describes as a “New American Restaurant but French themed.” There is classic French flair and finesse melded with Midwest sensibilities and borrowing at will from the American melting pot that reflects Jason’s own heritage and food experiences, including Dutch, German, Korean and Greek. The clean spare lines of the restaurant are complemented by menu items that range from elegant to rustic in style – always creative and sure to intrigue.

The Escargot are to die for, ditto on the Mussels [any one of the three styles of preparation]. Entrees are amazing as well [highly recommend the lamb chops] and don’t skip dessert. The Tasting menu with wine pairings is a great deal if you are really hungry. And you quickly learn that at Charisse, the experience is a team effort. The service staff is knowledgeable and well-trained and Jason works closely with his Sous Chef Alex Maggard to ensure that every element is well-matched. Bar Manager and mixologist Dennis Maas heads up a beverage program at Charisse that is top- notch with many great spirits, a developing barrel program, and superb selection of craft & classic cocktails. It’s definitely a Happy Hour hot spot for downtowners in the know.

Chef Jason’s enthusiasm & pride in his work shines through. Asked about his greatest pleasure, other than his beautiful family, he said: “Cooking can be an adventure and sometimes creating a dish can hover on the edge of disaster, but turning that around can be sheer magic – an ‘ah hah’ moment.” He’s clearly a happy man, so we guess he has a lot of those kinds of moments. Visit Charisse soon and see what magic he’s making!