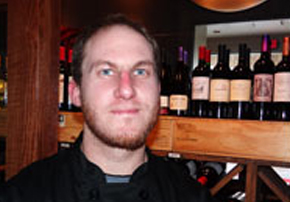 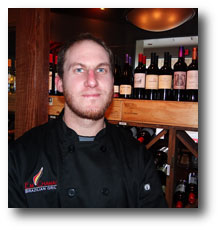 Chef Jared Ward remembers his first start in the kitchen being with his family. He was very young when he started cooking for many of the family vacations and holidays. As he grew up, so did his love for food. Chef Ward attended the Johnson County Community College culinary program for one year and then transferred to the Cordon Bleu culinary school in Las Vegas. After two years Chef Ward moved to Colorado Springs, where he did his internship at a popular wild game restaurant called Craftwood Inn. “Proteins are where I’m at” Chef Ward said.

Soon after leaving the Craftwood Inn, Chef Ward moved back to Kansas City, where he worked at the Aladdin and Raphael Hotels before landing at Em Chamas. Founded by Sam and Nick Silvio in 2007, Em Chamas is a traditional churrascaria, which translates to “house of meat” in English. In Brazil, steakhouses feature large churrasqueira, which are barbeque pits that are specially built to support skewers or spits that hold the meat. These Brazilian style steakhouses feature large skewers of meats that are “run” to the tables by the Passadors (food runners that carry the meats from table to table). They will carve each guest their own individual slices from the skewer, leaving them with piles of mouthwatering goodness on their plates. Guests “request” meats to be delivered by turning over a chip on the table, one side indicates yes, while the other indicates no. The Passadors read these chips and move around the restaurant accordingly.

Chef Ward works nearly every day of the week. He commands a large kitchen staff, as well as co-manages the Passadors with the Grill Master. It is a lot of work, but work that he enjoys.

Chef Ward told me that he often features a different menu for the bar than the Rodizio experience; Bacon Wrapped Shrimp and the Scallops are some of the must try items on the bar menu the Chef says. The Rodizio (which translates to “rotate” from its Portuguese origin) features some of the Chef’s favorites, which include the Lemon Pepper Lamb and the Top Sirloin stuffed with cheese. “I get to play around with a lot of different proteins and I really love that about this job.”

When not working, Chef Ward enjoys trying new restaurants around the city. “Our city has some great new restaurants popping up” said Chef Ward. A love of food and a desire to try new things translates well into his menu. For the true Brazilian Grill experience, check out Chef Ward and Em Chamas.