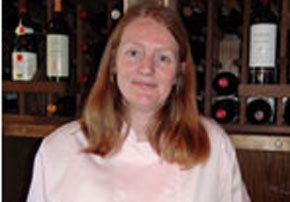 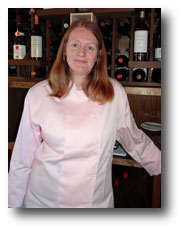 Cafe Des Amis in Parkville has been open for 14 years. Head Chef/Owner Ingrid Hanriot has been there for the last nine of those years. Chef Hanriot started cooking in France at the young age of 16. Soon after that, she went to culinary school and did an internship at a restaurant in France that was serving 300-400 people at a time. “I learned how to be fast.” She said.

Chef Hanriot runs Cafe Des Amis with her husband, Guillaume, who joined the restaurant in 2003 and was previously the pastry chef at Napoleon Bakery. Chef Hanriot runs a kitchen of only four employees. “It is the French way, always running.”

Amazingly, the quaint restaurant doubles in capacity in the summer. It seats 45 guests inside and 45 on the patio as well. “On Valentine’s day we did 122 covers.” This is impressive, considering the Chef told me, “Some people don’t realize that there is a French restaurant in Parkville.”

Chef Hanriot told me that one of her favorite dishes to prepare for guests in her restaurant is the Bouillabaisse. This is a traditional French Riviera dish, a light saffron seafood broth with salmon, halibut, clams, mussels, and prawns, served with traditional garlic croutons and rouille sauce.

“I love the atmosphere here. It is more of a family atmosphere.” Chef Hanriot told me that she is working in her kitchen every day for the lunch and dinner shifts. Passion and commitment both seem high on this Chef’s priority list. As a brand new mother, Ingrid only took three weeks off for maternity leave…then she was right back in the kitchen. That passion translates to her food, and the guests dining experience. For a truly French feast, please stop by Café des Amis and say, Bonjour!