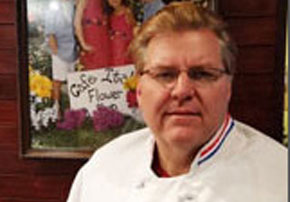 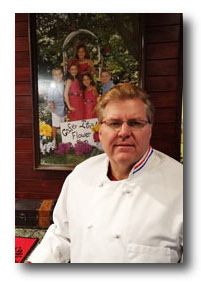 Here’s another great KC Originals chef, Guy Tamborello, who owes his career to strong family roots and youthful experience in family owned and operated restaurants. He is the chef and co-owner with childhood friend Paul Anselmo. For 18 years the two operated the original Café Italia on North Oak Trafficway until the neighborhood retail began declining in the slow economy and they were forced to close in 2010. After briefly pursuing other careers another opportunity was presented in 2011 an old Japanese steak house in Parkville. Soonthe pair were back at it, re-inventing their popular Italian eatery in the new, much larger space, but still offering authentic Southern Italian cuisine with an occasional nod to some contemporary American, as Guy says “to keep things interesting” and provide an occasional change of pace from the richer sauces that are standard with the array of pastas, chicken, and veal that are the heart of the menu.

Guy is the “sauce king” of the house and he learned those and other techniques in the kitchen, as well as managing a restaurant, from his own father who had owned two great restaurants [taco & barbecue] and also been associated with Jasper Mirabile in his first pizzeria endeavor. Those years of training imparted skills, entrepreneurship and a love for putting quality food in front of the customer. He spends massive amounts of time working daily in the restaurant, but when time allows Guy indulges his passions -family time and sport hunting and fishing – often combining the two. “Paul & I both like to hunt and fish big time and we travel the world to enjoy this. We pack up the families and head off to Africa or Europe and it’s a blast for us all.” Of course, visits to Italy are high on the list as well – for “research of course.”

Clearly Guy’s culinary research pays off as he adds new recipes to the volumes inherited from his family. One great source of pride is the hand made, in-house production of the entire menu. Breads, pastas, sausages, sauces, dressings, and all the desserts are made from scratch daily. Some breads, pastas, and the gelato desserts are even made in sight of guests in a small demonstration area carved out of the main dining room. Chef Guy’s favorite thing is to explore new flavors incorporated into the pastas and sauces and he especially likes to make lemon or eggplant flavored pasta or to stuff ravioli’s with lobster or fresh pumpkin. And he highly recommends the hazelnut gelato – “folks really love that,” he says. And he would know, as Guy’s style includes a lot of visits to tables to listen to his guests and make sure his establishment is proving the best service and food his guest’s want to eat. Asked about advice to folks who might want to work in a restaurant or even own one, he only has to think a minute: “Well, be sure to get hands on experience – takes notes and analyze what works and what doesn’t.” The food and service at Cafe Italia are clearly a tribute to lessons learned.