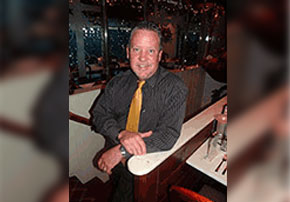 V’s Italian Ristorante was started by Vita Totta over 50 years ago. Greg Hunsucker has been working there for 40 of those years. Greg stared working at V’s at the young age of 13, as a bus boy, eventually working his way up through the kitchen as a dish washer, third cook, second cook, and then lead cook. In 1980 Greg became General Manager. In 1982, he was given the opportunity to buy into the family business and jumped at the chance.

Greg graduated from Joe Herndon Area Vocational Food Service School in 1976. In addition to running V’s, Greg has also helped to run several of the other family restaurant concepts such as V’s Pasta Parlors, and Tijuana Tacos and Chili. Greg, also, helped to develop and still oversees Creative Catering Concepts, which is V’s off premise catering company.

Greg became active with the Greater Kansas City Chapter of the Missouri Restaurant Association in 1987 and has held many different chairs on the committee. In 1991 he served as President and Chairman in 1992. He became active with the state association in 1996. He has been an officer since 2000, and served as President in 2003. Greg’s contributions to the association have earned him the prestigious award of being inducted into the Missouri Restaurant Association Hall of Fame this January 2014.

V’s has been a family run business from the beginning. Greg’s son, is the Dining Room Manager, with a host of employees that have been with them for years. Greg considers all of his employees as part of his family. “I have a dish washer that has worked here for 28 years, and some servers that have worked between 15 and 18 years here. We are very blessed in that department.”

“All of our recipes here are based on my mother- in- law’s mother from Italy, Vita Totta, and all are made from scratch. Our baked lasagna is probably the dish we are the most proud of. It is made in its own individual casserole and baked to order.” When Greg isn’t running V’s, he likes to dine out at some of his favorite KC Originals restaurants like Marina Grog and Galley and “any locally owned steak house. I’m a meat and potatoes kind of guy.”

V’s has been showered with many awards and accolades over the last 40+ years but some of Greg’s favorites include Best Wine List from Missouri Restaurant Association; Best Sunday Brunch in Town, and Most Romantic Restaurant both from Open Table. By the way, that award winning Sunday Brunch does come with complementary Champagne.