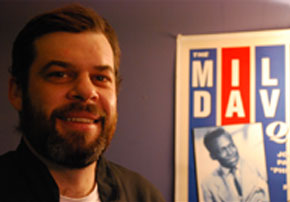 Glenn Bindley from The Phoenix

Chef Glenn Bindley took over kitchen duties at The Phoenix in November 2011. He brings over 20 years of culinary and restaurant management experience to the jazz club.

During his teenage years in the mid-80s, Bindley began working as a busboy making $2.50 per hour for his grandfather, an executive chef. From that humble beginning, he went to work at the Plaza Inn in Topeka as a kitchen manager and gained further experience. By 21, he was the facility chef at a retirement community where he slashed 24% food costs in half within two months.

He headed west to Nevada, worked at the Glendale Country Club, and studied under five-star master chef Leo Manhurdst. Guided by his mentor, Bindley worked as a chef tournade in Sparks, Nevada where his duties involved cooking in rotations during the dinner rush and special engagements at five restaurants. From his work at the Silver Club Casino and the Golden Phoenix to cooking for 4,000 people at an event, Bindley continued to grow and learn. He helped Manhurdst open an Italian restaurant and later worked with a master pastry chef in Phoenix for two years.

A few years ago, Bindley returned to the Midwest to be closer to family. In Kansas City, he cooked in stints at Le Fou Frog and Grinder’s and managed the kitchen at a D’Bronx location.

Now at The Phoenix, he intends to expand the jazz club’s selection of bar-friendly fare and entrees to include simple comfort food with a little Southern influence, healthy appetizers such as avocado fries, and more original dishes. Bindley prepares food from scratch that offers great value to customers.

His grandmother farmed 33 acres in Kansas including one acre set aside for the family. “We canned and butchered,” says Bindley. “I’m not into genetically-modified (GMO) foods. I like to keep my food simple and natural, five ingredients or less.”

As a veteran in restaurant and kitchen management, he draws on experience to lead cooks and create a team atmosphere. Bindley cites a lesson learned from his mentor. “Cooking is 10%; preparation is 90%.”

To that end, he trains cooks to own their station and learn how to multi-task. Never an empty hand, he adds.
He’s known to drop phrases like “clean as you go, sign of a pro” to motivate and remind his team of expectations. “I give respect to my employees the way I’d like to be treated. I don’t belittle them,” he says. “The kitchen is a family. We spend so much time here. I want my kitchen to run smooth.”

Even during the stormy moments of a dinner rush, Bindley urges calm and focus. “Keep moving. Work at the edge, but ask for help if you need it,” he says.

Chef Bindley speaks softly and patiently in a relaxed manner that offsets an undercurrent of quiet intensity. He enjoys receiving feedback about the food from his kitchen and hopes to make The Phoenix a dining destination that complements the jazz entertainment.