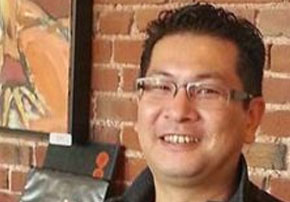 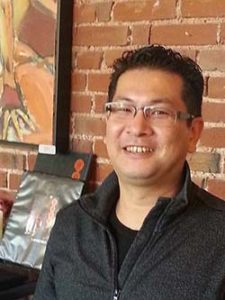 A native of Japan, Chef Fumi Nagase moved to the US over 20 years ago and spent the last 8 and ½ years as a chef at Nara one of Kansas City’s best known and most honored restaurants both for its Japanese inspired fusion menu as well as for fresh sushi. Chef Nagase deserves much of the credit for that especially on the sushi side of the ledger. As a young student of Chemistry at the state college at Marysville Fumi missed his mother’s home cooking. After college he wanted to remain in America and sought employment doing something he loved, working with food – first at local Japanese steak houses in Independence and Zona Rosa until he was discovered by Nara.

Chef sees his work as related to his chemistry degree [after all food is made up of complex chemical compounds] but his approach is less rigorously scientific and more homeopathic and nutrition centered. He believes in healthy food choices and even reflects on how the combination of certain ingredients might have a good effect on a guest’s health and well-being. It’s not just the nutritional benefits of fresh, wholesome ingredients but how certain foods can actually boost metabolism or enhance mood that he enjoys.

This handsome bachelor is a self-described couch potato who really enjoys watching You Tube videos on his days off; although he also finds time for plenty of fresh air playing golf when the opportunity presents itself. He is an aficionado of Italian cuisine with its focus on preparing a wide variety of meats, seafood and vegetables in ways that enhance and maximize their flavors. For dining out Chef Fumi named Garozzo’s as a favorite, along with the Vitenamese Café, and for seafood, Jarocho in KCK.

Our conversation about food at Nara of was centered around “sushi,” which most associate with raw fish, but is hardly limited to fish in the numerous creative ways it is offered – not all of which are raw. Chef had several suggestions of ways that someone who is a first timer to a sushi bar or has some concerns about eating uncooked seafood might approach it. “When you come in the best thing to do is find the most knowledgeable Chef and ask him to help you make your initial selections.” A great place to start is with “California Rolls”or “Philadelphia Rolls” or other preparations which contain cooked proteins liked seared ahi tuna.. He also suggests for those who worry about a fishy taste is to ask for soy paper versus the traditional seaweed wrappings.

As one becomes more comfortable and trusting of the chef then one moves from milder fish like Salmon to more potent flavors. Right now, Chef is loving the availability of fresh “Uni” [sea urchin] which is one of his favorite ingredients. His greatest pleasure, when time allows in a busy place like Nara, is to prepare “omakase” [selected by the chef] style. He loves recommending flavor profiles and fish choices to a guest and then creates special items just for them.

Nara, is a full service restaurant and cocktail lounge with numerous other choices of Asian inspired cuisines as well as wines, beers, and other spirits. They boast a popular outdoor patio with views of downtown Kansas City and a terrific private dining/event space upstairs. Their menu sourced with fresh, local products and changes seasonally in the Fall and Spring. Right now they are gearing up for KC Restaurant Week [mid-late January] as well as for the official opening of KC’s new light rail system that passes directly by their front door. Chef Fumi says he can’t wait to introduce new guests “who are riding the rails” to the wonders of Sushi and the great hospitality that is a trademark of Nara’s service.