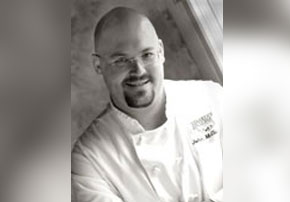 Executive Chef John McClure joined Starker’s Restaurant in 2005 and purchased the restaurant the following year. After growing up on a cattle ranch in Tescott, Kan., where he was ‘spoiled’ by fresh, homemade food prepared by his mother and grandmothers, McClure completed high school and worked as a Navy chef on an aircraft carrier stationed in Japan, for three years. He later attended the Culinary Institute of America, in Hyde Park, New York, and worked at Kansas City’s renowned American Restaurant after graduation. McClure learned Creole and Cajun cooking techniques while working at Brigtsen’s Restaurant in New Orleans, and then learned French techniques as a sous chef at 40 Sardines, before he moved to Starker’s.

“If you get a dish here you’ll know exactly what it is by looking at it – but with an elegant presentation,” McClure says. “We start with great ingredients and go from there. We offer a lot of soul-satisfying recipes such as fried chicken, mashed potatoes, and green beans, and we serve richer, heartier dishes in the winter.”