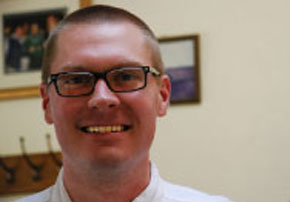 Salina native Grant Wagner has come a long way since he began washing dishes at a small Lawrence restaurant. He was the sous chef at JJ’s Restaurant, in the Country Club Plaza neighborhood, for a year and a half. Wagner worked in several restaurants while studying anthropology, but then realized how much he loved the lifestyle. He found his culinary calling at 4 Olives in Manhattan, KS. Wagner changed his career path and received an associate’s degree from Le Cordon Bleu in Scottsdale, AZ. He moved back to the Midwest to complete his degree with an internship at Kansas City’s Bluestem restaurant. Currently, he is the executive chef at JJ’s Restaurant.

Since his promotion from sous chef to executive chef, Wagner focuses on executing the fundamentals of the restaurant’s menu.

“We have a solid menu that doesn’t need adjustment,” he says. “If it isn’t broken, don’t fix it.”

“We have a lot of creative freedom to create specials,” he says.

As a young chef, Wagner continually works on his execution of classic dishes and learning his craft. He says, “I am trying to gain an encyclopedic knowledge of ingredients. I want to work with more local farmers.”

The chef has also shifted his energy toward preparing specials that marry well with JJ’s extensive cellar of wine. “I want to showcase dishes that pair well with wine. During spring, I’m cooking lighter food with Sauvignon Blanc and rose in mind.”

With Chef Wagner at the helm, JJ’s continues its tradition of culinary excellence with classic steaks, inventive specials, and fine wine.