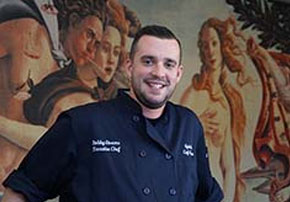 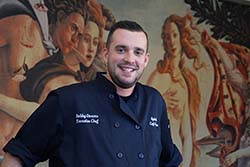 Although the first La Bodega in the city opened 14 years ago at 703 Southwest Blvd. KCMO, Chef English Renshaw has been cooking food since he was 4 years old. What can a mere child cook at the age of 4 you might ask? Apparently it is quite a bit. “I was my mom’s sous chef when I was 4,” Chef Renshaw said. “I cooked Thanksgiving dinner that year and have been around the kitchen ever since. My mom used to ask me when I was young if I wanted to go out and play. I would say “No, I’ll stay in and cook.”

Chef Renshaw has been with La Bodega at the KCMO location for 5 years. Before that he was with Morton’s Steak House for 5 years. Prior to Morton’s, English had some very rewarding and interesting jobs including shooting photography with his sister and doing night prep at Chubby’s Diner in Kansas City. Preceding those careers, he was catering small to large events for family and friends at the age of 15. “I think I have an inner fat guy and I just love food.”

While hosting the roll of Head Chef at La Bodega, English aided in opening the Leawood location. He trained the entire back of the house staff before their opening. He will soon go back to Leawood to train the new Chef at that location.

Some of the great Tapas dishes Chef Renshaw encourages his guests to try at his restaurant include: Queso de Cabra Al Horno, Pincho de Pollo y Chorizo, and Solomillo con Cabrales which translates to grilled beef tenderloin crusted with Spanish blue cheese. It’s my all-time favorite, which you can never go wrong with. Delicious!

Chef Renshaw is also re-working the entire lunch menu at La Bodega. What are some of the new items, you ask? Try the Steak Burger, which will have fresh arugula and heirloom tomatoes. He will also be smoking his own oils and aioli. “Our lunch menu will include ingredients that are locally grown and raised on nearby farms.”

If that isn’t enough to wet your culinary palate, Chef Renshaw also told me that the La Bodega in KCMO will soon have it’s own charcuterie shop off site, perhaps right next door. This shop will provide customers with salted, smoked, and cured meats. It will also sell sandwiches, paninis, and some breakfast items to its guests.

I always love to ask where a Chef goes out to dinner on his night off. Chef Renshaw responded, “I love the Westport area and around 39th Street. I’m a big fan of Room 39 and my wife and I really want to go to Justus Drugstore. Pierpont’s is a favorite of ours as well, at least when we don’t have kiddos in tow.”

When asked where Chef Renshaw gets his inspiration, he had a very interesting answer. “I grew up a vegetarian…. and then someone put a piece of pig in front of me and it evolved from there. ‘Not a vegetarian any more?’ No, I still have those roots and, I like to bring that stuff into my dishes. I think I incorporate it all very well.” He also stated, “I get a lot of culinary freedom here, granted I’m pigeonholing Spanish, but I get to pull from other cuisines and regions like France.”

La Bodega also has a phenomenal happy hour that English told me about….. and then we indulged in it. It runs at these hours and includes these:

All happy hour specials include ½ off select Tapas, beer and wine specials, and ½ price Sangria.

When I asked Chef Renshaw to tell me why people should come to La Bodega and try his food he responded, “Spanish food is HOT right now and it’s pretty fun. Tapas are about sharing and the interaction that you have with people at your table. Here we believe in bold flavors and so do I. I love a lot of flavors in my life.”