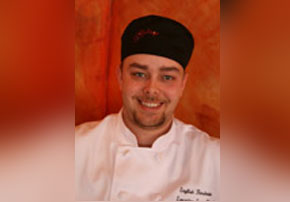 Chef English Renshaw remembers helping his mother in the kitchen by age four. During his early teens, he worked as a dishwasher and helped in the kitchen at The Corner Restaurant in Westport. By age 18, Renshaw was doing night prep work, baking, and a little bit of everything else at Chubby’s On Broadway. He then spent 5 ½ years working in the kitchen at Morton’s Steakhouse. While there Renshaw met T.J. Barnes who he later followed to La Bodega, where he began working in January. “I just love food,” Renshaw says. “I love to eat so much, and I love to try all new foods.” At home he cooks a variety of different cuisines, including Spanish, Italian and sushi.

Renshaw says that with plenty of tapas offerings at La Bodega, his culinary focus is on ‘the food of love’ and ‘small plates – big flavor.’ He also likes to use ingredients that are seasonal, fresh, readily available, and the right price, whether he’s cooking at the restaurant or for family and friends.