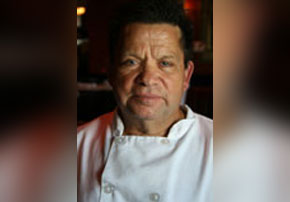 Born in the Basque region of Spain, Don Pepe attended culinary school in Switzerland more than 40 years ago. He worked in Monte Carlo and cooked for Aristotle Onassis on his yacht, at home, and while traveling. He also served as a personal chef for Kansas City oil executive, Mary Hudson, and has owned multiple Kansas City restaurants including Don Pepe, Café Barcelona, and Café Sevilla.

But Don Pepe believes that he found the best job he has ever had when he became Executive Chef at Johnny Cascone’s Restaurant in Overland Park, two years ago. “I could not have found a better job,” he says. Don Pepe spends approximately 20 hours per week in the restaurant kitchen.

This gregarious chef likes socializing with customers as much as he enjoys preparing their meals. “I like cooking for them and doing my best,” Don Pepe says. “I enjoy creating new dishes andI usually get to do what I want with specials. We change our specials daily and I like to use fresh ingredients. Cascone’s quality is the best.”