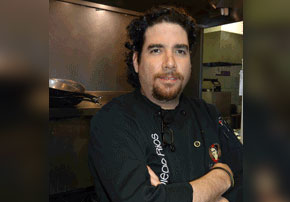 I personally love Mexican food, but it is so hard to find authentic Mexican food in the middle of the USA. Chef Diego Rios has been in the kitchen at Frida’s, leading the charge towards authentic and real Mexican fare since Frida’s opened in Overland Park over three years ago.

If you Google chefs in the KC area, you may not find one more accomplished than Diego Rios. Chef Rios 21 years of global cooking experience has brought a wealth of knowledge to the table at Frida’s. “I got my formal training in the middle of my career.” Chef Rios came to the United States for the opportunity as the Chef at Frida’s at the request of Ivan Marquez. Ivan is an owner of Frida’s and named his restaurant after Frida Kahlo, whom he claims, is the most famous female artist of the 20th century.

Before traveling to America, Chef Rios had a very impressive culinary journey. His last culinary port of call was in the place that he calls home… Mexico. Here, he ran three boutique hotels at the Lake of Chapala near Guadalajara. Before that, Chef Rios was in charge of three successful restaurants in Puerto Vallarta. And if that isn’t impressive enough, Chef Rios also lived in London, England for six years while getting his Culinary Degree. While in London, Chef Rios helped to open Jamie Oliver’s restaurant named “15”. He has worked with Chef Gordon Ramsay on a BBC TV show and cooked with him at his restaurant in Chelsea. “I sometimes watch his shows.” Chef Rios told me before I confessed that Hell’s Kitchen is my all-time favorite shows.

“My mom is from Italy and my father is from Mexico, I have been cooking Italian & Mexican food all of my life. I love both cuisines, but Mexican is absolutely my favorite. When I returned from London, I started to focus on and rescue the real Mexican food and authentic recipes. We love the Mexican food. It is a big treasure for us, and a treasure for humanity.” So, what is on his authentic menu? Chef Rios has two favorites and they are the most diplomatic dishes in the country of Mexico. First, he recommends the Chile en Nogada. It consists of Poblano peppers stuffed with ingredients that will make you order it again and again. Chef Rios told me that this dish was made for a past president of Mexico. Plus, the colors of the dish look like the Mexican Flag. The other favorite is a contemporary dish that Chef Rios calls Cerdo a la Jamaica. Delicious pork medallions are wrapped in bacon, stuffed with goat cheese, spinach and mushrooms, then drizzled with Jamaica sauce and a touch of real cocao. That sounds incredible.