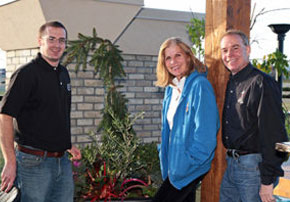 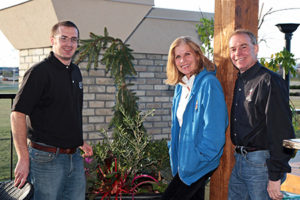 Are you ready for March Madness? Well, we know one place that most definitely is – Coach’s Bar & Grill. Laying claim [undisputed as far as we know] to being the oldest sports bar in Kansas City, it is certainly one of the best appearing on every Top 10 list in that category for most of its 30+ year history. We chatted with owner Chris Carle, to fill us in not only on their eventful past, but the reasons for their long-lived success. As she tells it, the secret is “a little bit of luck and lots of loyalty.”

In 1983 Chris had been working in the industry for a few years as a server and bartender and met business partner Mike Darby when they were both helping manage The Granfalloon. They talked about owning their own place one day and seized an opportunity in a space just east of Wornall on 103rd St. They jumped in and opened “The Bum Steer” steakhouse. Then came the flood of 1984 when Indian Creek poured 4 feet of water into the venue, pretty much wiping them out. What at first seemed a tragedy had a silver lining. Chris & Mike re-thought their concept and hit on an idea that was just catching on in other cities – live streamed sporting events via satellite dish. Coach’s Bar & Grill was officially launched in the Summer of 1985.

Today, clunky old tube TV’s have been replaced with flat screens that can be seen from just about every vantage point. There are massive projection screens that drop down in four areas to accommodate large groups. Big sporting events such as March Madness, World Series and Super Bowl draw huge crowds to Coach’s. “They might come at first for the sports,” says Chris, “but they come back for much more – the warm, friendly service, the atmosphere, as well as great food.” They have a steady stream of regulars. The staff knows them all by name as well as their drink, menu and seating preferences. Guests appreciate an atmosphere that is designed around displays of local sports memorabilia and history rather than glaring neon beer and liquor advertisements. Often there are competing, but friendly partisan crowds jammed in to cheer on their teams.

Chris oversees menu development for Coach’s [both at the original 103rd St. location and the 2nd on 135th St in OP that opened on 11/11/11] and loves to use her off time “recipe finding” both here in KC and on her vacation travels. She’s proud of Coach’s reputation for comfort food offerings such as “Pot Roast,” Meat Loaf” and “Chicken Pot Pie” as well as for more contemporary offerings such as the “Chicken Jark Nachos” that are very popular. There are daily specials, including fresh seafood, that supplement the basics. “The entire menu, pretty much, is locally sourced as much as possible and prepared from scratch in house.” Their most popular item – no surprise – is the McGonigle’s ground beef burger. It is amazing! But Chris loves creating new things as well, including street tacos inspired by a recent trip to Mexico that will incorporate her own special tweaks and twists.

Coach’s is clearly a passion for Chris. She “loves the business and the people.” She and Mike hire employees that are “connecting people” who interact with & know their guests and make every effort to make them feel comfortable and welcome. This has translated into low turnover which has allowed Coach’s to enjoy both employee and customer loyalty, in good times and bad. Since 1984, there have been 4 more devastating floods and each time employees and guests have banded together to protect, repair, and rebuild the Kansas City tradition that is Coach’s. That’s the kind of success for which Chris and her partners Mike and Mike’s son Brian strive.

So, if you are looking for a place to experience happy customers, great food, and an amazing local sports viewing experience, make sure to check out Coach’s. AND ask about their amazing catering service – it might be the best kept “secret” of Coach’s success story.