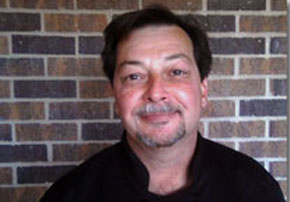 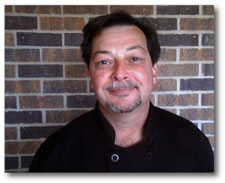 Haney was born in Germany and moved to the United States at a young age. Although he was raised in the Kansas City area, he has traveled throughout the country over the course of his culinary career. “I was brought up in the kitchen,” he says. “I got a good European training, very old school.”

Today, he brings his culinary skills, training, and management experience to Rumor’s, a full-scale makeover from a previous restaurant tenant.

True to his culinary training, Haney makes 85% of the food on his menu from scratch. Soups, stocks for sauces, and other menu items are prepared fresh. He cuts meat by hand five days a week. “I learned the right way to cook,” he says definitively. “I adhere to it.”

His management style takes a long-term approach. “I spend two to three years developing a crew. Then we can go to the next level,” he says. “When they’ve got that down, then it really becomes fun.”

The dishes sent to tables each night are a testament to his skill and methods. He teaches respect for proven technique and executing well without excuse. He says, “I’m a firm believer in ‘if you can’t do it right, then don’t put the food out.’”

With that in mind, his kitchen produces food that appeals to the restaurant’s varied customer base. Rumor’s draws diners from Lee’s Summit, Lakewood, Blue Springs, Independence, weekend traffic from the lake, and even Overland Park and Leawood. While the restaurant is a short drive by highway from these residential areas, but Haney understands that Rumor’s is still a destination restaurant. He focuses on preparing food and delivering an experience for customers that makes the journey worthwhile and convinces them to return.

Experience in both the hotel and restaurant sides of the hospitality industry is certainly an asset. Haney knows how to please customers that want good value, a range of interesting menu options, and solid service. These attributes never go out of style.

With this new venture, Haney is eager to build a diverse, loyal clientele that know Rumor’s Steakhouse is the place to go in eastern Jackson County.