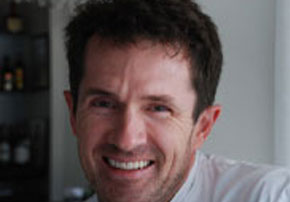 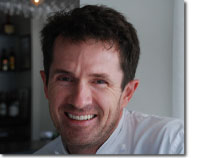 Chef Carl Thorne-Thomsen grew up in Connecticut and graduated from Cornell with a degree in English Literature. He lived in that area until the mid-nineties and then moved to Wichita to focus on creative writing while enrolled in a Masters of Fine Arts program at Wichita State University. There, he stayed busy writing short fiction, long fiction, poetry and plays. Soon that passion for writing was replaced by an interest in food.

“I lost direction with my writing,” he says. “I kept thinking about food and became a student of the cooking process until it started to make sense to me.”

He taught himself enough about cooking to land a job at a small gourmet food store, cafe, and espresso bar. There he met his future wife Susan, who also happened to be one of the owners. After three years the couple moved to Kansas City and started a family.

Thorne-Thomsen worked as a line cook at 40 Sardines and as chef de cuisine at Michael Smith Restaurant and Extra Virgin over nearly a decade.

After much planning, Carl and Susan opened their debut restaurant Story in 2010 in Prairie Village.

In part, Story refers to Thorne-Thomsen’s being inspired by ingredients and the story he can coax out of them into a dish. He tries to find the best, freshest ingredients to work with in the kitchen. Frequently, his imagination goes to work on those details and projects or produces a landscape or seascape, people at work in it; a “story” of sorts about or behind a particular ingredient begins to shape itself in his mind.

He says, “The more time I spend looking for ingredients, the more I also wind up knowing about them, where they are grown, pastured, and fished.”

The chef brings together ingredients like a story’s characters and plot details. “I try to heighten the ingredients,” he explains, bringing out their essential characteristics so a few items on a plate make an impact. “Each dish is simple and focused but not plain.”