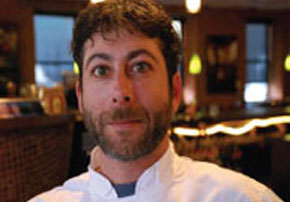 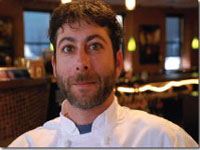 Chef Brian Aaron of Tannin Wine Bar & Kitchen has been cooking since he was a kid. His mother recalls when she asked him what he wanted for breakfast one morning when he was five-years-old.

“I told her that I wanted breakfast my way,” says Aaron. “Then I pushed a chair over to the stove to cook.” When he was older, Aaron would set up an omelette station by the stove to cook for friends during sleepovers at his house. “I’ve always liked cooking.”

At 15, Aaron began working at a restaurant when his older brother secured him a job at Sahara Cafe during high school. The owner showed Aaron some cooking fundamentals.

Later, he attended Colorado State University where he studied restaurant and resort management and then attended culinary school at Johnson & Wales University in Denver.

Over the course of his early career, Aaron has worked at Theo’s in Fayetteville, Arkansas as a sous chef and executive chef and at Kansas City-based restaurants Starker’s, Zin, and Parkway 600.

Each of Aaron’s diverse culinary experiences have imparted lessons that have shaped his approach to cooking today.

“In college, I worked at a vegetarian restaurant,” Aaron recalls of his time in Colorado. “No one was offering fresh produce from farmers markets or locally raised meat. I tried to cook healthy, delicious food with quality products available.”

The menu at Tannin reflects Aaron’s interest in using fresh, local products. Quality matters as well. Aaron also worked at a fancy “white glove” French restaurant for three years while in college. There, the owner shipped in high quality meats and produce.

“I gained exposure to these ingredients and a classic French menu,” says Aaron. Of his mentor, he adds, “He was a classic restauranteur. That supplemented my food training at culinary school.”