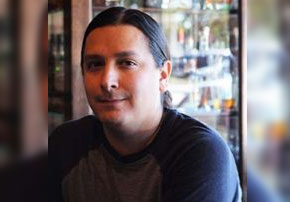 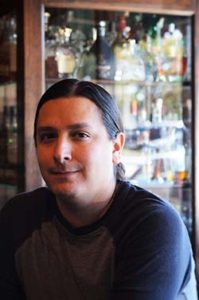 Common wisdom, it seems, often counsels young people to discover their passion in life and then build a career around it. Some might even say, that is what happens while engaged in college studies. Yet Chef Aaron Salinas is yet another example of a very talented chef whose passion was discovered while working at it. As a teen, Aaron’s first culinary experience was as a frozen custard maker. Then while at college at KS State in Manhattan, studying Anthropology, Sociology, and a little Art History, Aaron supported himself with jobs at small, family owned restaurants.

The seeds of his culinary passion were planted in those experiences. They were ethnic establishments specializing in Cajun, Tex-Mex, and Cuban cuisines and he was exposed to the smells and tastes of vibrant spices, gamier meats like goat & rabbit, and jerk sauce; as well as traditional slow-cooking techniques and marinades. After graduating college in 2010, while job hunting, Aaron took a position at Pierpont’s at Union Station, and the rest, as they say, is history.

The seeds planted in those earlier part-time jobs were nurtured and tended by a strong bond formed with Pierpont’s Executive Chef Eric Hyre, who not only honed Aaron’s culinary skills and talents, but passed on much needed skills in kitchen management and leadership. When the opportunity to take the helm and steer his own restaurant ship at Harry’s Country Club was offered in late 2014, Chef Aaron was ready and he jumped aboard enthusiastically. It was admittedly a little scary at first – and not what he had planned for his life – but with the strong training and discipline learned from chef mentors and friends, and the tremendous support of his parents, it has been full steam ahead in this new life chapter.

For those who might not be familiar, Harry’s Country Club is a roadhouse style establishment down with a great outdoor patio in the KC River market known for good, simple comfort food and bar fare and frequent live music events on the weekend evenings. It is appealing to a diverse crowd of business folks from downtown and the neighborhood, for lunch and happy hours especially, as well as visitors to this popular entertainment district. The menu has been pretty stable for several years, but Chef Aaron is gradually putting his distinctive stamp on it with tweaks and daily specials, which naturally draw from his past kitchen influences.

He tells us that he is particularly proud of new South American sandwich on Farm to Market Ciabatta [very much like a Cuban] that has been added to the regular menu and a Summer seasonal offering, a Ham & Pear Sandwich with Lemon Jelly [sounds very intriguing], that has been well accepted and some “totally amazing” pork rinds. – Which by the way are Chef Aaron’s guilty food pleasure. Under his leadership the menus at Harry’s will be becoming “more seasonal to be sure” he says, and the Happy Hour food menu will change up with greater frequency. We asked Chef to tell us how he would describe his culinary approach and even suggested some possibilities like “up-scale” or “sophisticated.” He closed his eyes for a moment and very clearly declared: “Thoughtful!”

His first full “thoughtful” menu upgrade should be hitting the tables very soon, if not already, with the Fall/Winter season offerings. So, we highly recommend that you venture on down to Harry’s Country Club and see what other new changes Chef Aaron is cooking up as this is just the beginning of his ambitious plans. If you can keep a secret, there were hints of the possibilities of an added new concept venue targeted to open just in time for the KC Trolley launch next March. But don’t wait for that. We don’t think you can go wrong with anything that Chef Aaron Salinas will create as he explores the depths of his culinary passion!